Devil May Cry and the Bible Part 2: Dante’s Crucifixion

*Note: there is an audio version of this article:

*Note: images below come from the Funimation YouTube channel.

In the last episode of Devil May Cry: The Animated Series, we witness the crucifixion of the main character, Dante. 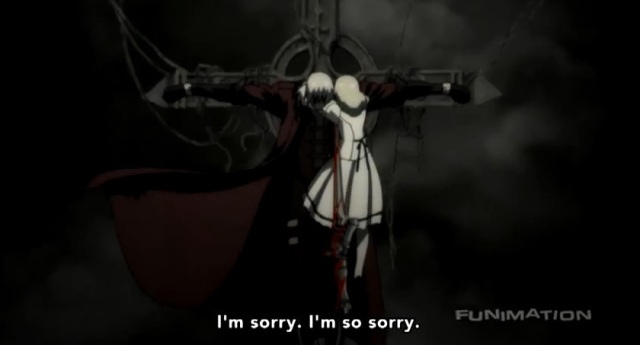 During Jesus’ Crucifixion, there was a darkness over the entire land:

“And when the sixth hour was come, there was darkness over the whole land until the ninth hour. And at the ninth hour Jesus cried with a loud voice, saying, Eloi, Eloi, lama sabachthani? which is, being interpreted, My God, my God, why hast thou forsaken me?” (Mark 15:33-34)

“And Jesus said unto him, Verily I say unto thee, Today shalt thou be with me in paradise. And it was about the sixth hour, and there was a darkness over all the earth until the ninth hour. And the sun was darkened, and the veil of the temple was rent in the midst.

And when Jesus had cried with a loud voice, he said, Father, into thy hands I commend my spirit: and having said thus, he gave up the ghost.” (Luke 23:43-46)

Dante is surrounded by darkness during his crucifixion:

Jesus is noted to be crucified in Golgotha-the place of a skull:

“Then delivered he him therefore unto them to be crucified. And they took Jesus, and led him away. And he bearing his cross went forth into a place called the place of a skull, which is called in the Hebrew Golgotha: Where they crucified him, and two other with him, on either side one, and Jesus in the midst.” (John 19:16-18)

“And when they had mocked him, they took off the purple from him, and put his own clothes on him, and led him out to crucify him. And they compel one Simon a Cyrenian, who passed by, coming out of the country, the father of Alexander and Rufus, to bear his cross.

And they bring him unto the place Golgotha, which is, being interpreted, The place of a skull.” (Mark 15:20-22)

Dante is crucified in a place of skulls: 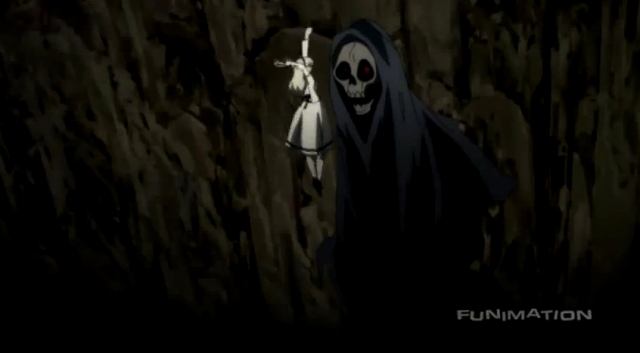 John 19:31-37 shows how and why Jesus was pierced during his crucifixion:

“The Jews therefore, because it was the preparation, that the bodies should not remain upon the cross on the sabbath day, (for that sabbath day was an high day,) besought Pilate that their legs might be broken, and that they might be taken away. Then came the soldiers, and brake the legs of the first, and of the other which was crucified with him.

But when they came to Jesus, and saw that he was dead already, they brake not his legs: But one of the soldiers with a spear pierced his side, and forthwith came there out blood and water. And he that saw it bare record, and his record is true: and he knoweth that he saith true, that ye might believe.

For these things were done, that the scripture should be fulfilled, A bone of him shall not be broken. And again another scripture saith, They shall look on him whom they pierced.”

Dante is also pierced during his crucifixion: 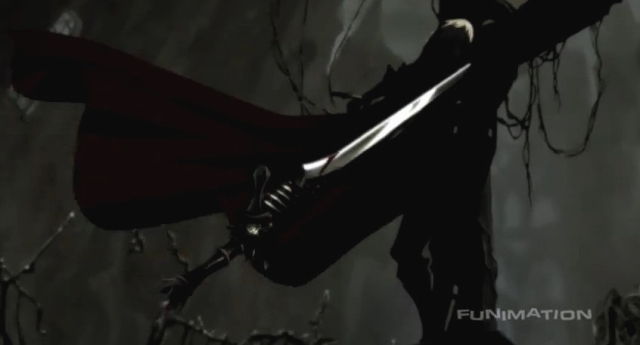 Several women “bewailed and lamented” Jesus before the crucifixion, and watched him after his death:

[On the road to the crucifixion] “And there followed him a great company of people, and of women, which also bewailed and lamented him.” (Luke 23:27)

[After Christ’s death] “There were also women looking on afar off: among whom was Mary Magdalene, and Mary the mother of James the less and of Joses, and Salome; (Who also, when he was in Galilee, followed him, and ministered unto him;) and many other women which came up with him unto Jerusalem.” (Mark 15:40-41)

[After Christ’s death] “Now when the centurion, and they that were with him, watching Jesus, saw the earthquake, and those things that were done, they feared greatly, saying, Truly this was the Son of God.

And many women were there beholding afar off, which followed Jesus from Galilee, ministering unto him: Among which was Mary Magdalene, and Mary the mother of James and Joses, and the mother of Zebedees children.” (Matthew 27:54-56)

Patty (a child introduced earlier in the show) goes after Dante into the demonic world where he is crucified. She is shown both “beholding afar off” and “bewailing and lamenting” him: 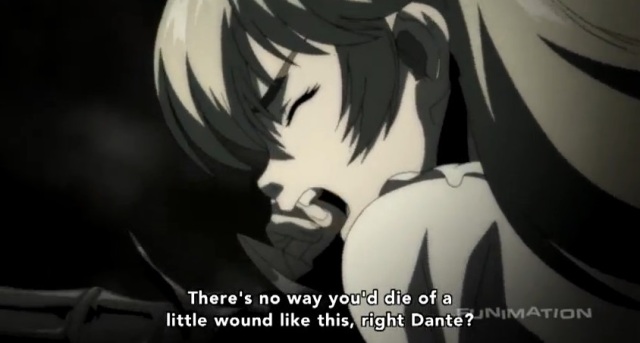 When Patty tries pulling the sword out of Dante (seen in the second picture above) she makes this comment: “Please, wake up! And then take down the devil like you always do!”

[God speaking of Satan] “Thou wast perfect in thy ways from the day that thou wast created, till iniquity was found in thee.

By the multitude of thy merchandise they have filled the midst of thee with violence, and thou hast sinned: therefore I will cast thee as profane out of the mountain of God: and I will destroy thee, O covering cherub, from the midst of the stones of fire.

Thine heart was lifted up because of thy beauty, thou hast corrupted thy wisdom by reason of thy brightness: I will cast thee to the ground [this is as literal as “take down” gets], I will lay thee before kings, that they may behold thee.” (Ezekiel 28:15-17)

Before his crucifixion, soldiers put a “scarlet robe” on Jesus and mocked him:

“Then the soldiers of the governor took Jesus into the common hall, and gathered unto him the whole band of soldiers. And they stripped him, and put on him a scarlet robe.

And when they had platted a crown of thorns, they put it upon his head, and a reed in his right hand: and they bowed the knee before him, and mocked him, saying, Hail, King of the Jews!

And they spit upon him, and took the reed, and smote him on the head. And after that they had mocked him, they took the robe off from him, and put his own raiment on him, and led him away to crucify him.” (Matthew 27:27-31)

A scarlet robe is Dante’s habitual clothing, and he wears it to his death:

Perhaps the most disturbing part is not the crucifixion itself-with its blatant similarity to that of Jesus Christ-but what happens after. In Jesus’ case, we know that after dying on the cross for our sins he rose again on the third day:

On the cross, Jesus was mocked by the people with a very specific challenge:

“And saying, Thou that destroyest the temple, and buildest it in three days, save thyself. If thou be the Son of God, come down from the cross.” (Matthew 27:40)

“He saved others; himself he cannot save. If he be the King of Israel, let him now come down from the cross, and we will believe him.” (Matthew 27:42)

“Likewise also the chief priests mocking said among themselves with the scribes, He saved others; himself he cannot save. Let Christ the King of Israel descend now from the cross, that we may see and believe. And they that were crucified with him reviled him.” (Mark 15:31-32)

“And the people stood beholding. And the rulers also with them derided him, saying, He saved others; let him save himself, if he be Christ, the chosen of God. And the soldiers also mocked him, coming to him, and offering him vinegar, And saying, If thou be the king of the Jews, save thyself.

And a superscription also was written over him in letters of Greek, and Latin, and Hebrew, This Is The King Of The Jews.

And one of the malefactors which were hanged railed on him, saying, If thou be Christ, save thyself and us.” (Luke 23:35-39)

However, Jesus did NOT come off the cross (Philippians 2:6-8), but Dante does. After being pulled into the human world, Patty shortly sees the resurrected Dante off his cross: 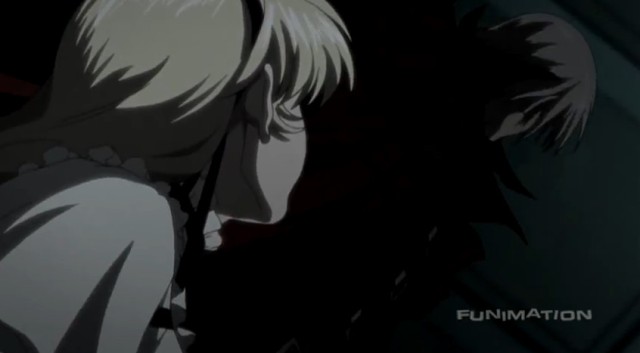 This is not only anti-biblical, setting up Dante as the “the Son of God” (among other things) by passing their test, but this also carries a deeper message. Jesus couldn’t (and didn’t) come off of the cross because he wasn’t powerful enough, wasn’t truly God-but Dante can, and is. It goes further.

After Jesus rose again, he appeared to his disciples:

And after eight days again his disciples were within, and Thomas with them: then came Jesus, the doors being shut, and stood in the midst, and said, Peace be unto you.

Then saith he to Thomas, Reach hither thy finger, and behold my hands; and reach hither thy hand, and thrust it into my side: and be not faithless, but believing. And Thomas answered and said unto him, My Lord and my God.” (John 20:24-28)

We see how Jesus showed Thomas his nail and spear wounds after his resurrection. Since Dante was crucified in a demonic world, there is a dreamlike haze over the events seen.

Sharpen the image though, and what appears? Nails.

After Dante comes off his cross, we still see both the nail wounds: 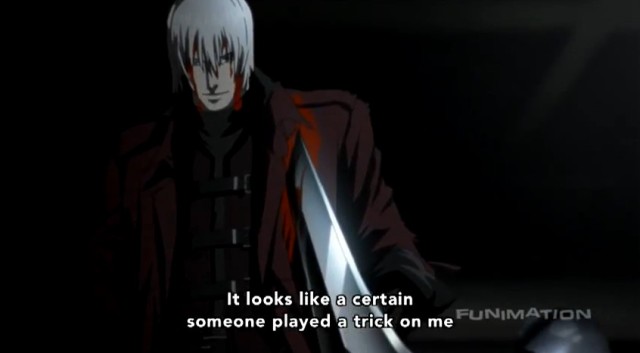 Lastly, the Bible says of Jesus’ death and resurrection:

“And you, being dead in your sins and the uncircumcision of your flesh, hath he quickened together with him, having forgiven you all trespasses; Blotting out the handwriting of ordinances that was against us, which was contrary to us, and took it out of the way, nailing it to his cross;

And having spoiled principalities and powers, he made a shew of them openly, triumphing over them in it.” (Colossians 2:13-15)

In this case the “principalities and powers” it speaks of are the demonic or devilish ones:

“For we wrestle not against flesh and blood, but against principalities, against powers, against the rulers of the darkness of this world, against spiritual wickedness in high places. ” (Ephesians 6:12)

Accordingly, after Dante’s death and resurrection, he is triumphant as well: 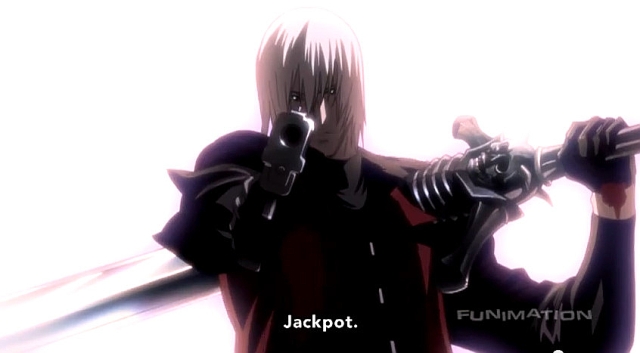 “And they asked him, saying, Master, but when shall these things be? and what sign will there be when these things shall come to pass? And he said, Take heed that ye be not deceived: for many shall come in my name, saying, I am Christ; and the time draweth near: go ye not therefore after them.” (Luke 21:7-8)

5 Responses to Devil May Cry and the Bible Part 2: Dante’s Crucifixion