Far Cry and the Bible: The Figures of Vaas Montenegro and Pagan Min

Spoiler alert: due to the nature of this examination, spoilers of both Far Cry 3 and 4 are included.

The release of Far Cry 4 has been met with both critical and commercial success. Having played the game, I was genuinely surprised to find that it did not contain much the depravity of its predecessor, Far Cry 3.

However, both entries’ attitudes towards Christianity and Christ himself are…Sketchy, at best. This is best seen in their main antagonists, Vaas Montenegro and Pagan Min:

In Far Cry 3, you stab Vaas to death with a ritual knife shortly after he says:

“Take me into your heart. Accept me as your savior. Nail me to the f*ing cross and let me be reborn!“

Vaas (with outstretched arms) asks the player character to “Accept me as your savior.“

You, the player, are forced to stab this savior figure (or “another Jesus“) to death with a ritual knife.

“And Jesus answering them began to say, Take heed lest any man deceive you: For many shall come in my name, saying, I am Christ; and shall deceive many.” (Mark 13:5-6)

Far Cry 4 features overtly Biblical imagery/terms by having you work with a Bible-quoting gun dealer named Longinus. In your first meeting he says:

“So, I started thinking to myself. When the Son of God is reborn, what gun would he choose?“

Later in his initial conversation with Ajay Ghale, Longinus reiterates: “What gun would Jesus choose?“

“And out of his [Jesus’] mouth goeth a sharp sword, that with it he should smite the nations: and he shall rule them with a rod of iron: and he treadeth the winepress of the fierceness and wrath of Almighty God.”
(Revelation 19:15-16)

However, the most interesting aspect of Far Cry 4 from a Biblical perspective is the depiction of antagonist (dictator of Kyrat) Pagan Min.

I’d like to take note of a couple things found on the cover of the game:

“Let no man deceive you by any means: for that day shall not come, except there come a falling away first, and that man of sin be revealed, the son of perdition; Who opposeth and exalteth himself above all that is called God, or that is worshipped; so that he as God sitteth in the temple of God, shewing himself that he is God.” (2 Thessalonians 2:3-4)

“And the king shall do according to his will; and he shall exalt himself, and magnify himself above every god, and shall speak marvellous things against the God of gods, and shall prosper till the indignation be accomplished: for that that is determined shall be done. Neither shall he regard the God of his fathers, nor the desire of women, nor regard any god: for he shall magnify himself above all.“ (Daniel 11:36-37)

“And I stood upon the sand of the sea, and saw a beast rise up out of the sea, having seven heads and ten horns, and upon his horns ten crowns [Pagan is also known as King Min], and upon his heads the name of blasphemy. And the beast which I saw was like unto a leopard, and his feet were as the feet of a bear, and his mouth as the mouth of a lion: and the dragon gave him his power, and his seat, and great authority.” (Revelation 13:2-3)

Thus far, every one of the verses shown in connection to this one scene speaks of the Antichrist. Continuing to follow this association brings some very interesting results, especially towards the end of the game.

In one of the last missions of Far Cry 4, you storm Pagan Min’s stronghold and discover that he has a golden statue built in his image.

You destroy this statue with high explosives. 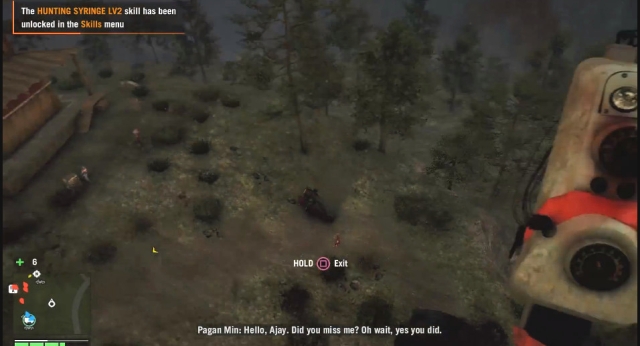 [while surveying Pagan’s dead body]
Pagan Min: “Hello, Ajay. Did you miss me? Oh wait, yes you did.“

Pagan Min: “Good people of Kyrat, I’m sure you will be delighted to know that the reports of my death are completely and utterly inaccurate…”

Continued: “I am alive, and all is right in the world…”

At the end of the speech:
“To summarize. Change is good. Embrace it. Your King is alive. Rejoice.“

What does this sequence have to do with the giant golden statue in Pagan’s stronghold? Head over to Revelation 13 again:

Pagan Min both received a “deadly wound” and survived and forced his people to “make an image” in his honor.

3 Responses to Far Cry and the Bible: The Figures of Vaas Montenegro and Pagan Min