In first person shooter Robot Roller-Derby Disco Dodgeball* (RRDDD) players sling dodgeballs at each other instead of bullets. 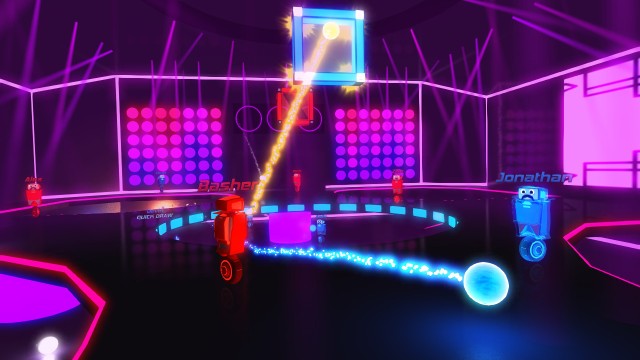 ·Robot Roller Derby Disco Dodgeball’s gorgeous neon and electronica-fueled visuals mask a surprisingly intense challenge. When you finally grasp the unique movement system, or wallop an opponent from across the room with a calculated throw, the satisfaction is palpable. Beneath the silly moustaches and customizable eyebrows is a deep yet non-violent shooter that relies on precision and exact timing.

·Outside of a few exceptions, fast-yet-strategic FPS gameplay has largely disappeared since the days of Quake and Unreal Tournament. This makes Robot Roller-Derby Disco Dodgeball a fantastic option/alternative for fans of old-school shooters.

·The soundtrack is INCREDIBLE. Seriously, just listen to it.

·The game features a multitude of modes and maps, giving it a HUGE amount of replay value. You can battle an opposing team around a series of neon pillars one match, and play a game of pseudo-basketball in a discotheque the next. RRDDD even features a randomized “Arcade” campaign where you fight to earn superpowers and become the President of the Galaxy.

·In a gaming environment filled with gritty, “mature” shooters, a bright sense of humor and style makes Robot Roller-Derby Disco Dodgeball a refreshing change of pace.

·One “Trickshot” worth 500 points is called “Godlike.” You earn this by catching an opponent’s ball in mid-air and using it to destroy another enemy before touching the ground.