*Pertinent Scriptures (and occasionally, websites) are highlighted with blue lettering–click to view them.

In the face of a world that mocks the God who came to save them as well as us, admitting our common heritage as sinners—normal people saved by the grace of God alone–is difficult. So, many Christians attempt to cultivate an image of unpolluted righteousness, forming themselves into apparently shining examples of moral fiber.

I’m not saying this is a bad thing. We’re certainly meant to be examples. I’m asking the question: What do you do when even one of those jagged lines you drew in the sand turns out to be a facade? What do you do when you’re placed in an environment without real-life consequences (such as that found in a video game) and confronted with blocked progress, pain, or just basic desire?

I can tell you what I did.

Pictured is the aftermath of an encounter with another survivor in NEO Scavenger.
I couldn’t stop. I drove my crowbar into his lungs for the last time…

I didn’t have to sleep with the married woman in Westerado: Double Barreled, or construct a voodoo doll in Monkey Island 2: LeChuck’s Revenge. I didn’t need to seduce a Struggling Artist’s Model or rob a drunken cavalry officer lying in a ditch in Fallen London. I didn’t have to pray to an Old God in Eldritch, or beat a man until his bones shattered and lungs burst in NEO Scavenger—consuming his body to stay alive for one more pitiful day.

In some cases, I excused these actions in the name of ‘research.’ After all, if I’m going to tell others about Biblical and moral issues in titles, I have to go down the proverbial rabbit hole myself, right? In other cases, I wanted to test what a game would allow me to do. Can I use super-strength and a can of beans to turn a soldier’s head into a bloody pulp? Find a way to murder a family (of cannibals, it turns out) and still be seen as good?
What will the consequences (or rewards) be? And perhaps more importantly–does any of this actually matter when I can simply reverse my decisions by loading a previous save? 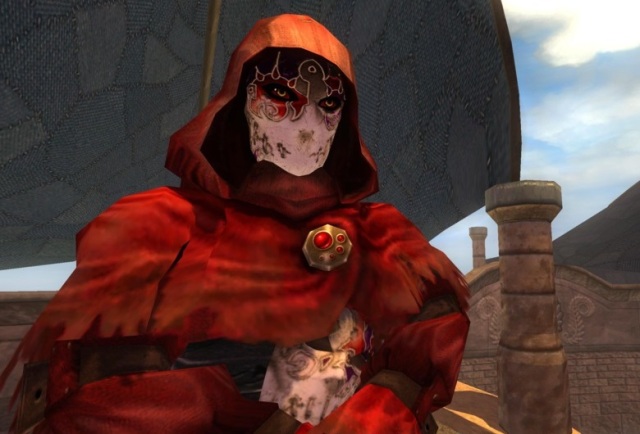 Pictured is Jack of Blades from the original Fable. He said I’d win a “special prize” if I murdered my friend in the arena for the pleasure of the crowd.
Guess what I did.

This line of thought was concerning enough, but when I found what horrible things I could do when my actions weren’t judged by a binary in-game good-or-evil morality system…That’s when I really began to question myself.

Why do I feel guilty, even after I go back and make the ‘right’ choice? Am I still a ‘good person,’ regardless of what I do or feel in-game? How evil is ‘too evil?’ What is wrong–for me? Is my perception changing with spiritual maturity and liberty…Or plummeting standards?

What if I’m compromised?

What if I’m not alone?

I took to Twitter (with the unexpected help of @ProceduralJOYE–many thanks) to ask if the games people played had ever affected them in real life. The responses were astounding.

@Foxmcloud555 @VidGames_Bible I never played Paper Mario, so I had to google to see how heinous this was And Well Hm pic.twitter.com/mOweOiuIg4

@VidGames_Bible @ProceduralJOYE oh, I don’t know if you saw, but I was so upset by this that I actually deleted that save and started over

@VidGames_Bible After the 2nd/3rd cute thing you’ve killed, it stops being relaxing and Toki looks a whole lot less cute

@VidGames_Bible I stole food & medicine from a scared old couple in This War of Mine Ashamed to say, I’d probably do it again if I had to

@VidGames_Bible changed the way I game. If I can’t be the hero I won’t play anymore. Can’t handle the disappointment.

Stories of feeling sick or guilty after murdering in-game characters, of restarting games whose length spans dozens of hours to change a single choice. It’s a testament to the power of video games as a medium–living proof that this so-called ‘disposable’ entertainment can make a serious difference, for good or ill.

And the saying, “It’s just a game?” It’s emblematic of a mindset that is willfully blind to these experiences.

It suggests that the actions we commit inside these virtual worlds–the decisions we physically choose to make, their consequences, and the resulting personal feelings they evoke–are meaningless. That we’re monkeys plinking time into a shiny box to escape the reality that we’re monkeys. That at the end of the day, there aren’t human beings with thoughts, consciences, and emotions behind every screen.

Anyone could look at an immoral act committed inside a video game such as murder or theft and say “That’s bad, so why don’t you stop playing?,” but that would be missing the point. I don’t personally care about shooting waves of mindless drones in Call of Duty or Battlefield. However, that man in NEO Scavenger?

I wanted him to die.

Interactions and gameplay systems are mechanical in nature, the resulting scenes shaped out of pieces of art and lines of code, consequences reversed with the load of a save, but their effects on our hearts and minds are undeniable.

In real life, I’m constantly afraid of giving a wrong impression and being seen as a bad person. I edit every tweet, examine and qualify every statement…Though I have genuine intentions, I exert so much effort appearing to be good that I end up “believing my own hype” and forget my basic, flawed humanity.

And then I play a game.

I see how callous, selfish, and petty I can be. I see myself. The part I hide from the world–that we all hide, to a certain extent. Pretending these sides of ourselves don’t exist is easier than confronting the darkness lurking at our collective core, revealed by the most unlikely of sources:

*More from Video Games and the Bible.

1 Response to Editorial: Pixelated Mirrors–How Games Showed Me I’m Not a Good Person