Master Spy* gameplay footage and developer interview from the Video Games and the Bible YouTube channel:

Master Spy‘s Steam store page is positively spartan, containing little more than a small series of concise bullet points. For any other game, I’d find this brevity frustrating. However, in Master Spy‘s case, it’s quite appropriate. Independent developer TurboGun stripped every aspect of the game’s design to its absolute core, tearing apart any unneeded mechanic or progression system that happened to come along before promptly throwing them into an incinerator.

In doing so, they made the best shark-hopping, laser-grid-avoiding, invisibility-trenchcoat-clad platforming classic I’ll never be able to finish. 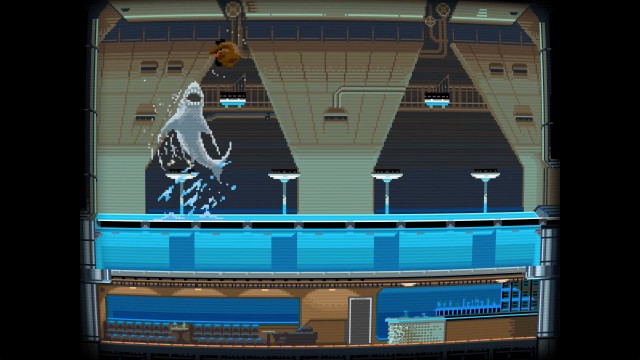 TurboGun uses gorgeous pixel art to create stunning cinematic cutscenes, tiger-guarded industrial labyrinths loaded with intricate engines of death, and shadowy deals conducted high over a sprawling metropolis. Each new screen is a unique treat for the eyes, making information overload a very real possibility. After all, you’re Master Spy. You’re supposed to blend in. So simultaneously keeping track of your character, traps, enemy patrols, objective locations, *and* every potential route through a given stage is difficult to say the least.

I see you hiding there, Master Spy…

One thing you won’t find yourself confused by is your basic moveset. As the titular Master Spy, you can move left/right, jump, double jump, and use an experimental invisibility trenchcoat. That’s it.

This allows stages to act not only as platforming gauntlets, but as exploratory puzzles. Finding how your rudimentary abilities interact with an expanding range of traps in a Rube Goldberg-esque fashion to eventually get you to your goal is thrilling in itself.

Then, of course, you’ll need to figure out how to do it faster. How to do it so you don’t get caught or eaten. Simple sequences like jumping off a platform, cloaking to avoid detection, grabbing a critical item, and leaping back up to escape are quickly supplanted. Soon, you’ll perform complex chains of (still basic) movements. You’ll cloak and uncloak in mid-air, hover with a desperate double jump just long enough to land behind a guard’s field of view, and dash between the teeth of sawblades and rabid attack dogs only to escape at the last possible second.

Always better, always faster, always sneakier – every time you don’t think you have it in you to succeed, and you do, the very next stage somehow manages to press you farther. The fact that the game relentlessly pushes you–trusts you–to eventually find some reserve of *something* to surmount whatever it throws at you is both its greatest strength and weakness.

It almost feels like Master Spy is a living thing, taunting you. Saying, “Surely, you can handle this now, right?” 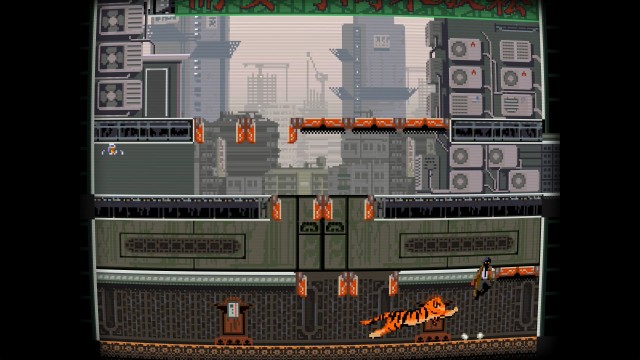 You will die so, so, many times.

I could go on and on about the pitch-perfect level design that ensures failure is fair, and battles hard-won. I could talk about how finding secret levels throughout the game not only adds replay value, but actually changes its story. We could delve deeper into Master Spy’s pixel art, exploring how tiny background details and animation choices make what is essentially a barebones retro stealth-platformer feel alive. However, it’s hard to appreciate these thoughtful touches when everything is trying to murder you.

And that’s the thing that frustrates me most, I think. My save file currently places Master Spy in some godforsaken corner of a Hong Kong hideout littered with deathtraps, and I’m never going to get beyond it. I don’t have the skill necessary. Master Spy is asking more from me–always more–and I just can’t keep up.

You can tell love drips from every pore of this title (it does so much SO RIGHT), but the average player may not have the patience or ability to see what it has to offer.

I have hated Master Spy with an intense passion. I have loved it more than any platformer I’ve ever played before. I will never see the next exotic locale it has to offer.

And at the end of the day, I think I’m okay with that.

*Support Video Games and the Bible