Mario and the Bible: Another Jesus

*NOTE: Check out our new series-Mario and the Bible: Thousand-Year Curse!

In 2 Corinthians 11, Paul warned us of “another Jesus.” Let’s see if we can find examples of this in one of the most popular game series of all time-Mario.

*All pictures below are from Super Mario Wiki and have had their sizes modified for easier reading and viewing.

“There is none holy as the LORD: for there is none beside thee: neither is there any rock like our God.” (1 Samuel 2:2)

“Because I will publish the name of the Lord: ascribe ye greatness unto our God. He is the Rock, his work is perfect: for all his ways are judgment: a God of truth and without iniquity, just and right is he.” (Deuteronomy 32:3-4)

“The Lord is slow to anger, and great in power, and will not at all acquit the wicked: the Lord hath his way in the whirlwind and in the storm, and the clouds are the dust of his feet.” (Nahum 1:3)

The clouds Mario is walking on in the promotional picture above are made to look like “the dust of his feet.” Additionally, with this power-up, Mario creates clouds:

“Sing unto the Lord with thanksgiving; sing praise upon the harp unto our God: Who covereth the heaven with clouds, who prepareth rain for the earth, who maketh grass to grow upon the mountains.” (Psalm 147:7-8)

“Ask ye of the Lord rain in the time of the latter rain; so the Lord shall make bright clouds, and give them showers of rain, to every one grass in the field.” (Zechariah 10:1)

“Therefore have I poured out mine indignation upon them; I have consumed them with the fire of my wrath: their own way have I recompensed upon their heads, saith the Lord GOD.” (Ezekiel 22:31)

“And to you who are troubled rest with us, when the Lord Jesus shall be revealed from heaven with his mighty angels, In flaming fire taking vengeance on them that know not God, and that obey not the gospel of our Lord Jesus Christ:” (2 Thessalonians 1:7-8)

“And they went up on the breadth of the earth, and compassed the camp of the saints about, and the beloved city: and fire came down from God out of heaven, and devoured them.” (Revelation 20:9) 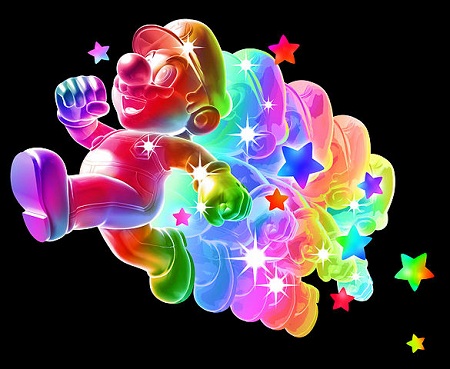 “And he[Jesus]had in his right hand seven stars: and out of his mouth went a sharp twoedged sword: and his countenance was as the sun shineth in his strength.” (Revelation 1:16)

“Unto the angel of the church of Ephesus write; These things saith he [Jesus] that holdeth the seven stars in his right hand, who walketh in the midst of the seven golden candlesticks;” (Revelation 2:1)

“And unto the angel of the church in Sardis write; These things saith he [Jesus] that hath the seven Spirits of God, and the seven stars; I know thy works, that thou hast a name that thou livest, and art dead.” (Revelation 3:1)

With all this evidence (and this is only a partial list), is it surprising that in the original Mario game (Donkey Kong) Mario appears as a carpenter?:

“Is not this [Jesus] the carpenter, the son of Mary, the brother of James, and Joses, and of Juda, and Simon? and are not his sisters here with us? And they were offended at him.” (Mark 6:3)

We can see that Mario is indeed “another Jesus.” However, he is much more than that: 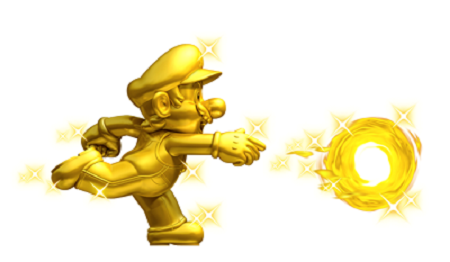 One of Satan’s coverings was gold:

“Thou hast been in Eden the garden of God; every precious stone was thy covering, the sardius, topaz, and the diamond, the beryl, the onyx, and the jasper, the sapphire, the emerald, and the carbuncle, and gold: the workmanship of thy tabrets and of thy pipes was prepared in thee in the day that thou wast created.” (Ezekiel 28:13)

In the next verse, it calls Satan “the anointed cherub:”

“Thou art the anointed cherub that covereth; and I have set thee so: thou wast upon the holy mountain of God; thou hast walked up and down in the midst of the stones of fire.” (Ezekiel 28:14)

Cherubs have wings, as can be found in the Bible at various places including here:

“Then did the cherubims [cherubims is the plural form of cherub] lift up their wings, and the wheels beside them; and the glory of the God of Israel was over them above.” (Ezekiel 11:22)

Take a look at Wing Mario:

Additionally, the verse said of Satan that “thou hast walked up and down in the midst of the stones of fire.” Mario walks on lava throughout the series, in forms such as Ice Mario from Super Mario Galaxy:

Trading Card description: “When he powers up to this transformation, he can walk on any body of water or lava by freezing the liquid in hexagonal platforms and simply walking across.” 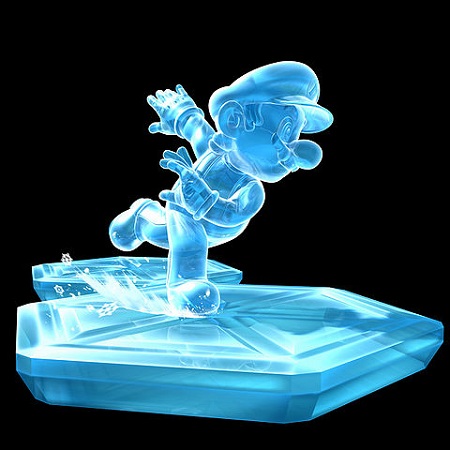 In the latest installment of the series, New Super Mario Bros. U, the player has a special way of interacting with Lakitu:

The player is able to ascend above the clouds located at the top of the screen and defeat Lakitu, allowing you to steal and ride his cloud for a short time.

[Lucifer AKA Satan speaking] “I will ascend above the heights of the clouds; I will be like the most High.

Here we see Jesus sitting on a white cloud:

“And I looked, and behold a white cloud, and upon the cloud one sat like unto the Son of man, having on his head a golden crown, and in his hand a sharp sickle.” (Revelation 14:14)

And we see God riding a cloud:

“The burden of Egypt. Behold, the Lord rideth upon a swift cloud, and shall come into Egypt: and the idols of Egypt shall be moved at his presence, and the heart of Egypt shall melt in the midst of it.” (Isaiah 19:1)

Here’s how these passages connect to Mario:

Mario ascends above the clouds, kills the person sitting upon and riding a cloud, then rides it himself. This is just like how Lucifer said: “I will ascend above the heights of the clouds; I will be like the most High.”

Additionally, it says that Satan “shalt be brought down to hell, to the sides of the pit.” This happened to Mario in Super Paper Mario, when he went to a Hell-like place called the Underwhere.

This is not only “another Jesus.” Mario-the hero, mascot of Nintendo, is literally the Devil himself.

Finally, despite Satan’s boasting earlier, the Bible tells of his ultimate fate:

“And the devil that deceived them was cast into the lake of fire and brimstone, where the beast and the false prophet are, and shall be tormented day and night for ever and ever.” (Revelation 20:10)