The Elder Scrolls and the Bible Part 2: Alduin

*Note: Images below come from YouTube and Elder Scrolls Wiki unless otherwise noted.

I will quote Alduin himself:

“I am Alduin. Most mighty of any in the World!”

“And the heavens shall praise thy wonders, O Lord: thy faithfulness also in the congregation of the saints. For who in the heaven can be compared unto the Lord? who among the sons of the mighty can be likened unto the Lord?” (Psalm 89:5-6)

“O Lord God, thou hast begun to shew thy servant thy greatness, and thy mighty hand: for what God is there in heaven or in earth, that can do according to thy works, and according to thy might?” (Deuteronomy 3:24)

“Circumcise therefore the foreskin of your heart, and be no more stiffnecked. For the Lord your God is God of gods, and Lord of lords, a great God, a mighty, and a terrible, which regardeth not persons, nor taketh reward:” (Deuteronomy 10:16-17)

“I am immortal, I cannot die!”

[Speaking of Jesus] “Who only hath immortality, dwelling in the light which no man can approach unto; whom no man hath seen, nor can see: to whom be honour and power everlasting. Amen.” (1 Timothy 6:16)

“Now unto the King eternal, immortal, invisible, the only wise God, be honour and glory for ever and ever. Amen.” (1 Timothy 1:17)

“This World is mine.”

“I [God] know all the fowls of the mountains: and the wild beasts of the field are mine. If I were hungry, I would not tell thee: for the world is mine, and the fulness thereof.” (Psalm 50:11-12)

“Arrogant mortals! Your pride will be humbled.”

“Dragonborn [the player character], your pride will be humbled.”

“Behold, the Lord, the Lord of hosts, shall lop the bough with terror: and the high ones of stature shall be hewn down, and the haughty shall be humbled.” (Isaiah 10:33)

“Now I Nebuchadnezzar praise and extol and honour the King of heaven [God], all whose works are truth, and his ways judgment: and those that walk in pride he is able to abase.” (Daniel 4:37)

“Fools! Treacherous ones! Your hopes all wither! I am your doom.”

“ It is he [God] that sitteth upon the circle of the earth, and the inhabitants thereof are as grasshoppers; that stretcheth out the heavens as a curtain, and spreadeth them out as a tent to dwell in:That bringeth the princes to nothing; he maketh the judges of the earth as vanity.

“My children will arise.”

“But before faith came, we were kept under the law, shut up unto the faith which should afterwards be revealed. Wherefore the law was our schoolmaster to bring us unto Christ, that we might be justified by faith.

But after that faith is come, we are no longer under a schoolmaster. For ye are all the children of God by faith in Christ Jesus.” (Galatians 3:23-26)

“For the Lord himself shall descend from heaven with a shout, with the voice of the archangel, and with the trump of God: and the dead in Christ shall rise first:

Then we which are alive and remain shall be caught up together with them in the clouds, to meet the Lord in the air: and so shall we ever be with the Lord.Wherefore comfort one another with these words.” (1 Thessalonians 4:16-18)

Some of Alduin’s abilities include…

“Then Saul, (who also is called Paul,) filled with the Holy Ghost, set his eyes on him. And said, O full of all subtilty and all mischief, thou child of the devil, thou enemy of all righteousness, wilt thou not cease to pervert the right ways of the Lord?

And now, behold, the hand of the Lord is upon thee, and thou shalt be blind, not seeing the sun for a season. And immediately there fell on him a mist and a darkness; and he went about seeking some to lead him by the hand.

Then the deputy, when he saw what was done, believed, being astonished at the doctrine of the Lord.” (Acts 13:9-12)

“Is not my word like as a fire? saith the Lord; and like a hammer that breaketh the rock in pieces?” (Jeremiah 23:29)

“In my distress I called upon the Lord, and cried unto my God: he heard my voice out of his temple, and my cry came before him, even into his ears.Then the earth shook and trembled; the foundations also of the hills moved and were shaken, because he was wroth.

There went up a smoke out of his nostrils, and fire out of his mouth devoured: coals were kindled by it.” (Psalm 18:6-8)

“And there went out fire from the Lord, and devoured them, and they died before the Lord.” (Leviticus 10:2)

“The Lord hath done that which he had devised; he hath fulfilled his word that he had commanded in the days of old: he hath thrown down, and hath not pitied: and he hath caused thine enemy to rejoice over thee, he hath set up the horn of thine adversaries.” (Lamentations 2:17)

“Whereas Edom saith, We are impoverished, but we will return and build the desolate places; thus saith the Lord of hosts, They shall build, but I will throw down; and they shall call them, The border of wickedness, and, The people against whom the Lord hath indignation for ever.

And your eyes shall see, and ye shall say, The Lord will be magnified from the border of Israel.” (Malachi 1:4-5) 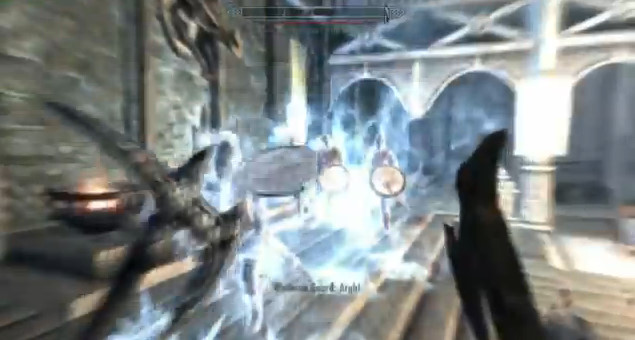 “He [God] destroyed their vines with hail, and their sycomore trees with frost.” (Psalm 78:47)

“Who can stand before his indignation? and who can abide in the fierceness of his anger? his fury is poured out like fire, and the rocks are thrown down by him.” (Nahum 1:6)

What Paathurnax said of Alduin after the latter’s death:

“So, it is done. Alduin’s dead. The Eldest is no more, he who came before all others, and has always been.”

“I am Alpha and Omega, the beginning and the ending, saith the Lord, which is, and which was, and which is to come, the Almighty.” (Revelation 1:8)

“And the four beasts had each of them six wings about him; and they were full of eyes within: and they rest not day and night, saying, Holy, holy, holy, Lord God Almighty, which was, and is, and is to come.” (Revelation 4:8)

Alduin even performs several resurrections, as in the case of the dragon Sahloknir.              An abridged version of a resurrection from the mission, “A Blade in the Dark:” 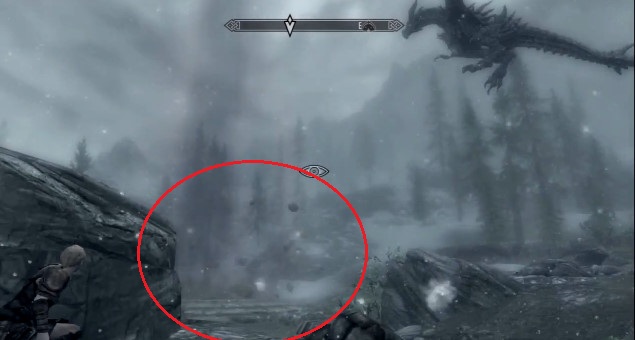 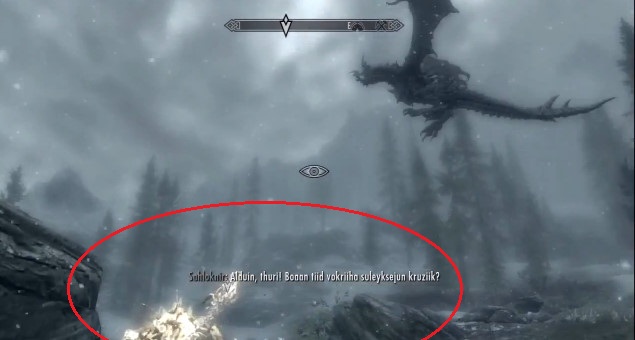 “Then they took away the stone from the place where the dead was laid. And Jesus lifted up his eyes, and said, Father, I thank thee that thou hast heard me. And I knew that thou hearest me always: but because of the people which stand by I said it, that they may believe that thou hast sent me.

And when he thus had spoken, he cried with a loud voice, Lazarus, come forth.

And he that was dead came forth, bound hand and foot with graveclothes: and his face was bound about with a napkin. Jesus saith unto them, Loose him, and let him go.” (John 11:41-44)

“For as the Father [God] raiseth up the dead, and quickeneth them; even so the Son [Jesus] quickeneth whom he will.” (John 5:21)

“Why should it be thought a thing incredible with you, that God should raise the dead?” (Acts 26:8)

A quote from Sahloknir: “Alduin, my lord!”

“And after eight days again his disciples were within, and Thomas with them: then came Jesus, the doors being shut, and stood in the midst, and said, Peace be unto you.Then saith he to Thomas, Reach hither thy finger, and behold my hands; and reach hither thy hand, and thrust it into my side: and be not faithless, but believing.

All this evidence points to Alduin being a false replacement of God. Since Alduin is the ultimate enemy, this sets God up as a villain when in fact the opposite is true:

“This then is the message which we have heard of him, and declare unto you, that God is light, and in him is no darkness at all.” (1 John 1:5)

“What shall we say then? Is there unrighteousness with God? God forbid.” (Romans 9:14)

After reading the in-game book “Alduin is real and he ent Akatosh” (which the following quotes come from), we see that Alduin is not only “another Jesus” as we’ve seen before but a representation of the Devil as well:

“But Alduin? He ent good! He’s the opisit of good! That Alduin is evil thrue and thrue.”

“But Alduin is a real dragon, with flesh and teeth and a mean streak longer than the White River. And there was a time when Alduin tried to rool over all of Skyrim with his other dragons. In the end, it took sum mitey strong heroes to finally kill Alduin and be dun with his holy sorry story.”

But Alduin is a real dragon:

“And the great dragon was cast out, that old serpent, called the Devil, and Satan, which deceiveth the whole world: he was cast out into the earth, and his angels were cast out with him.” (Revelation 12:9)

And there was a time when Alduin tried to rool over all Skyrim with his other dragons:

“How art thou fallen from heaven, O Lucifer, son of the morning! how art thou cut down to the ground, which didst weaken the nations! For thou hast said in thine heart, I will ascend into heaven, I will exalt my throne above the stars of God: I will sit also upon the mount of the congregation, in the sides of the north:

This mixing of good and evil, God and Satan, is both unscriptural and wrong:

“But ye [Christians] are a chosen generation, a royal priesthood, an holy nation, a peculiar people; that ye should shew forth the praises of him who hath called you out of darkness into his marvellous light;” (1 Peter 2:9)

“Woe unto them that call evil good, and good evil; that put darkness for light, and light for darkness; that put bitter for sweet, and sweet for bitter!” (Isaiah 5:20)