Papers, Please* gameplay from the Video Games and the Bible YouTube channel:

Papers, Please is a unique puzzle game set in the (fictional) oppressive Communist-type regime of Arstotzka. As Inspector of the newly-opened East Grestin border checkpoint, it is up to you to decide who enters the country. 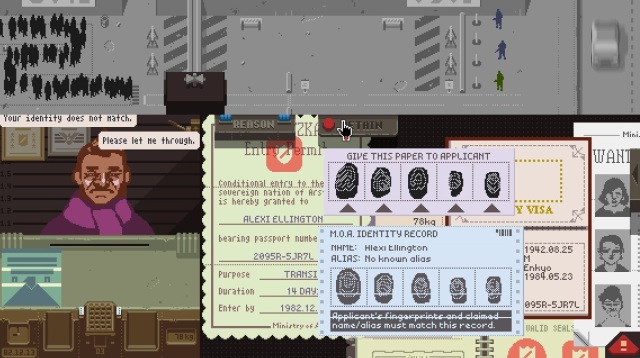 “Your identity does not match.”
“Please let me through.“

Gameplay consists of hunting for discrepancies in immigration paperwork in order to determine whether or not someone is allowed into Arstotzka. 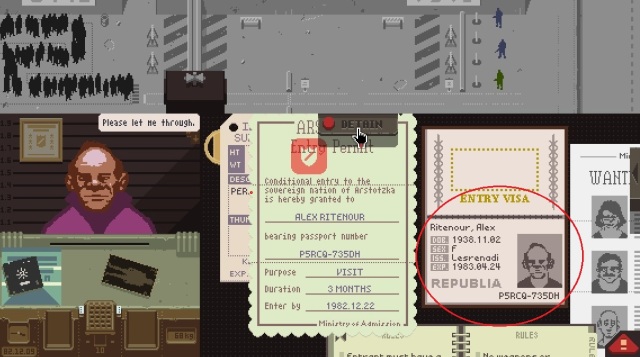 The passport indicates that the entrant should be female. Since the entrant is actually male, this means the document was likely forged.

During each in-game day, you must process immigrants as quickly and accurately as you can to ensure the survival of your family. Operational errors and taking bribes can result in fines (or worse), meaning you may not be able to pay for food, medicine or heat.

After paying for the rent, having no savings only allows me to pay for the medicine of one member of my family…
My mother-in-law died the next in-game day.

Papers, Please makes the process of operating an immigration checkpoint interesting without becoming stale over time. Terrorist attacks, shifting policy and rising regional tensions change the rules daily. This can take the player from denying foreigners one day, to performing invasive body scans the next.

Finding that this entrant was heavier than his listed weight lead to my scanning him for contraband. Evidently, he was attempting to smuggle explosives into Arstotzka.

The core gameplay loop is compelling enough to justify spending hours competing for the top-score in Endless mode. Three options are available in Endless mode: Perfection, Endurance and Timed.

What elevates Papers, Please above simply being a puzzle game with unique aesthetics, is an immense sense of atmosphere. You can understand the setting and world of Papers, Please within moments of first loading the game and hearing its theme:

Through explicit (told through in-game newspapers and bulletins), environmental (seen in the words and actions of in-game characters) and emergent (personalized by the consequences of actions initiated by the player) storytelling, Papers, Please reveals itself as a mature game for mature gamers. It confronts you with heady subjects such as prostitution, governmental authority and the nature of good and evil with two simple stamps marked APPROVE and DENY.

“I used to be an inspector like you.”
“Many years ago. Back in United Fed…“ 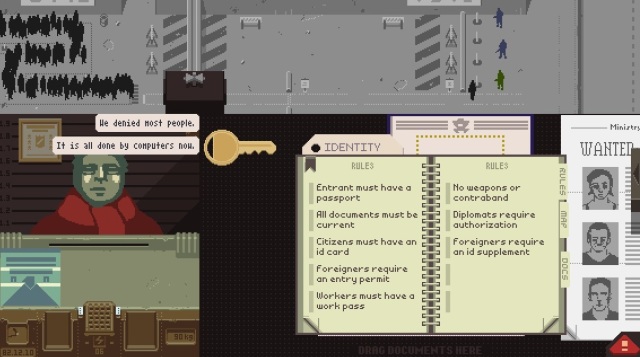 “We denied most people.”
“It is all done by computers now…“

“They can deny much faster that way.“

If you deny his forged documentation, he simply comments:
“So this is what it feels like.“

The greatest evidence that Papers, Please is a game designed for mature players is seen in the moral situations presented. One such situation deals with Arstotzkan brothel, “The Pink Vice.”

“Hali Liu” and her various immigration documents. According to her Work Pass, she seeks a career in Food-Service.

After the approval of her documents, she leaves behind a letter stating:

“A man named Dari Ludum promised me and my sister good work in Arstotzka.

I do not trust him. I am afraid he will take my passport and force me to work at brothel. He is in line today. 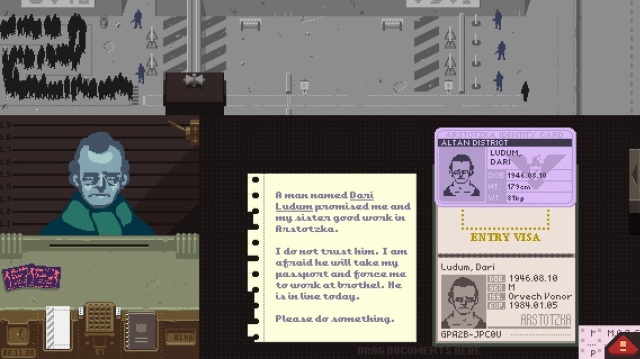 Dari Ludum’s papers alongside the letter speaking of his intentions and the immigrant’s possible fate.

You have the choice to deny the man entry. However, since his documentation is correct, it could earn you a citation and even a fine.

“What is this [expletive]? Give my papers back.“

On the other hand, you can let him through, allowing him to continue his business in Arstotzka.

“You come down, I give you good girl.“

You could say that your choice in this situation “doesn’t matter.” After all, aren’t these simply digital characters, many of whom you’ll never see in-game again?

I would argue the exact opposite.

Unlike television or cinema, video games are an interactive medium where the actions depicted onscreen are performed and initiated by you.

It is your decision whether the man or woman seeking life-saving surgery is turned away, or a grieving father is assisted in his quest for revenge… 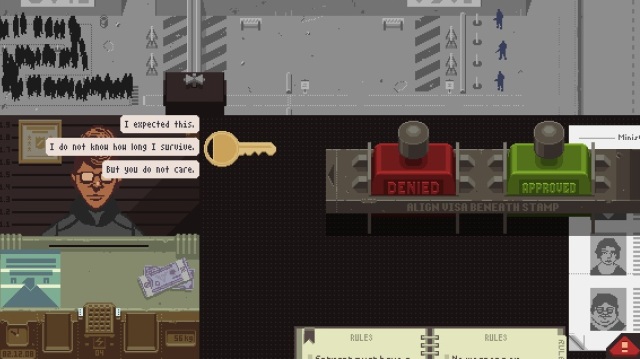 “I expected this. I do not know how long I survive. But you do not care.“

“I make him suffer like he did to Julia.“

This makes Papers, Please one of those rare games for mature players that serves as a mirror. It causes us to reflect on our actions and question what kind of people we really are.

Papers, Please is an undoubtedly well-crafted game, with interesting puzzle mechanics and a lo-fi aesthetic. However, the themes, ideas, and moral quandaries presented mean Papers, Please is best played by mature gamers with a developed conscience and clear sense of right and wrong.

Strong profanity is frequently used throughout the game. 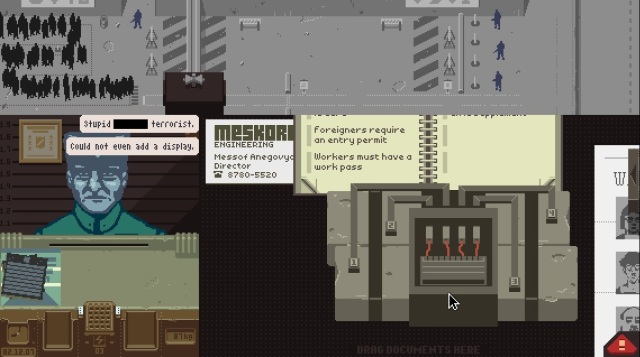 Nudity is also present in the form of scans used to detect drugs, contraband, etc. However, this can be circumvented by UN-CHECKING the “Nudity” option in the Options menu. 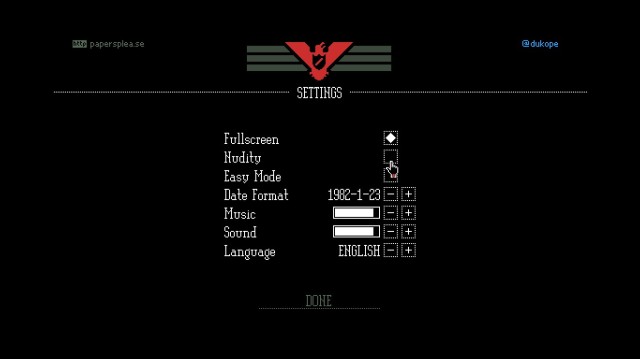 When disabling the Nudity option…

…suspects are shown in their undergarments rather than fully nude.

…suspects are shown in their undergarments rather than fully nude.

Scenes of intense violence are rendered in stark pixel animation.

The bloody result of a terrorist attack upon the checkpoint…

Purchasing this game through the Humble Store (above) gives you a Steam code, with 10% of each purchase going to charity.