Please note that the review below is for the PS4 version, and may not reflect content/gameplay found in other editions.

Ripstone and VooFoo Studios (the publisher and developer of Pure Pool, respectively) have done it again.

Their previous title, Pure Chess, stripped away unnecessary gimmicks from the game of Chess to focus on its strategic beauty. Pure Pool continues this approach by further refining the already-impressive visuals and applying them to a new field: Billiards.

The first thing you will notice is Pure Pool’s minimalist presentation. A short tutorial reveals immersion-breaking elements commonly seen in video game billiards (such as “power meters”) have been removed. 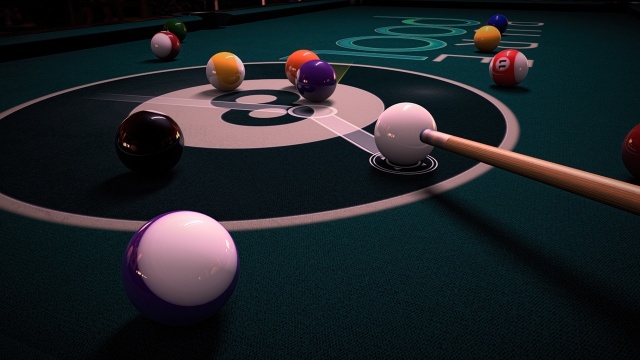 That white line is NOT a “power meter” but a visual aid to help new players judge angles/their ability to realistically make certain shots.

To adjust your pool cue, move the left stick. To strike the ball, pull back on the right stick as far as needed and let ‘er rip. Hold circle and move the cue to apply spin; hold square to walk around the table; swipe your finger across the PlayStation 4 touchpad to look from side to side before a shot…The controls are intuitive, and the effect is wonderfully immersive.

However, as with almost any gaming simulation, there will necessarily be a disconnect between your input on a controller and the actions taken on screen. This means avid pool players may have a hard time adjusting to playing pool without a cue in their hands. 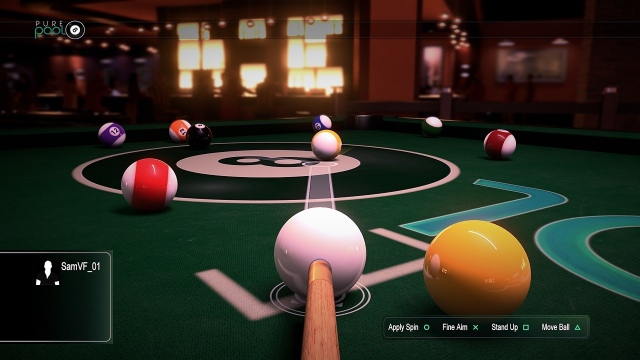 The visual aid can/will be removed as your skill increases. This increases the immersion significantly.

The technology used to render Pure Pool is like nothing I have seen before. Except for a few graphical glitches from time to time, the visuals are nothing short of incredible and really seem to take advantage of next-gen hardware.

The presentation of the game manages to be quite cinematic as well, with a puff of chalk dust following the winning shot…

Pure Pool contains a large number of singleplayer options, although only two (8-ball and 9-ball) have Career modes associated with them.

The two Career modes included are quite expansive and can easily provide over 10 hours of play apiece.

The large number of singleplayer options range from old standbys such as classic 8-ball and 9-ball, to a developer-made mode (Accumulator) to special “Challenges” like Checkpoint (which tasks you with “potting” as many balls possible within a limited time period)…There are about 9 modes available in all.

A screenshot of the “Checkpoint” mode.

The main weakness of singleplayer is the unusually proficient AI. One wrong shot can lead to a flawless victory by your opponent–even on the easiest difficulty levels. Although this hearkens to real life (I’ve lost that way more times than I can count…), it can definitely frustrate certain gamers looking for a more casual experience.

Both local and online multiplayer is present, though it is difficult to find a match online at present. However, this is not as much of a concern as it is in other indie multiplayer games due to one serious innovation: Player DNA.

Basically, every time you play Pure Pool, data is collected on how you play. How hard you hit the ball, whether you go for easy or hard shots, etc. This is assembled into a DNA profile that anyone can download and play against.

An easy shot towards the corner pocket…

The Player DNA system means you are never without a unique opponent to play against.
It stands alongside the truly spectacular graphics to set Pure Pool apart from the competition.

Like its predecessor Pure Chess, Pure Pool is the next-best-thing to reality. It sets a standard of realistic play and graphical excellence–without including negative elements commonly associated with the activity, such as gambling.

The pool table  you play on appears to be placed in a bar of some sort.

Purchasing this game through the Humble Store (above) gives you a Steam code, with 10% of each purchase going to charity.