Please note that the review below is for the PS4 and PC versions, and may not reflect content/gameplay found in other editions.

Defense Grid 2* (DG2) gameplay from the Video Games and the Bible YouTube channel:

Defense Grid 2 is the sequel to classic tower-defense game, Defense Grid: The Awakening. Designed for the next generation of consoles to be more accessible while also giving players more freedom, DG2 is the evolution of its accomplished predecessor.

The PS4 version in action.

Despite its striking looks and blazing-fast performance, the aliens of Defense Grid 2 seem to be less visually distinctive than in the previous entry (Defense Grid: the Awakening). This upsets the “rhythm” of Defense Grid, reducing levels to shooting wave after wave of largely similar opponents rather than reacting to changing enemy types and configurations.

Enemies in the PC version of Defense Grid 2

Enemies in the PC version of the original Defense Grid.

The number of characters and ideas thrown at you from the beginning of DG2 (many of which were originally introduced in the DLC for the first game, Containment) makes the plot instantly confusing–even for players of the previous game.

This may be disappointing to newcomers. Fortunately, the gameplay is polished enough to redeem the title. 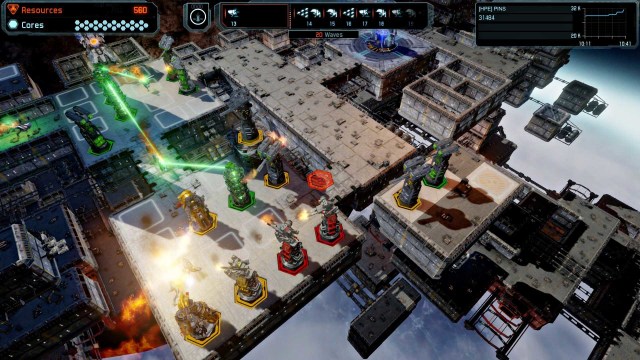 For those unfamiliar with Defense Grid or the Tower Defense genre in general, the main concept is easy to grasp. In each level you have to protect your “cores” from being taken by waves of alien opponents with different shapes, sizes and abilities. To do this, you are given a variety of towers to place around the stage, each with its own strengths and weaknesses.

To this basic formula, the latest installment of the Defense Grid series adds a number of features to assist players. These include but are not limited to:

Usually, tower defense games only allow you to place turrets on specific points in a map, or to build the path that enemies walk through. Defense Grid incorporates both approaches with well-crafted levels offering a number of ways to destroy your opponents.

You can tackle levels with or against another player with Defense Grid’s fully-fledged multiplayer functions.

In the previous Defense Grid, your freedom felt limited due to the brutal optimization you constantly had to conduct. You’d often find yourself rewinding wave after wave, trying to find the right mix of tower type and placement. This issue seems to be alleviated in DG2, which lets you use the towers that you enjoy more often, rather than those that are simply effective.

Finally, several game modes are available for each level. They change the fundamental “rules” of Defense Grid in unique ways, forcing you to play the same stage differently. This potentially transforms the 20 levels of Defense Grid 2 into over 100. Combined with the new tower upgrade system, it significantly increases the replay value of this title.

After every level, you obtain new, permanent upgrades you can use to outfit the towers to suit your playstyle.

While it would be hard to measure up to the original Defense Grid’s polish, Defense Grid 2 accomplishes that splendidly, offering a number of improvements upon its predecessor. However, as much as DG2 moves the formula forward, it lacks the simple yet intriguing story component that makes the original so engaging.

Some vaguely spiritual terms and phrases (“soul-cases,” going “into the void,” etc.) are used in the narrative:

“…The formicant said, “Leave us empty.” Such madness. Formicants are hollow things until we remake them as soul-cases. We lift them from their isolation and fill their void. So why does this formicant delay us?…“

I still don’t quite understand the story or these terms, but it’s something to watch out for.

Occasional instances of language (such as the word for an illegitimate child).