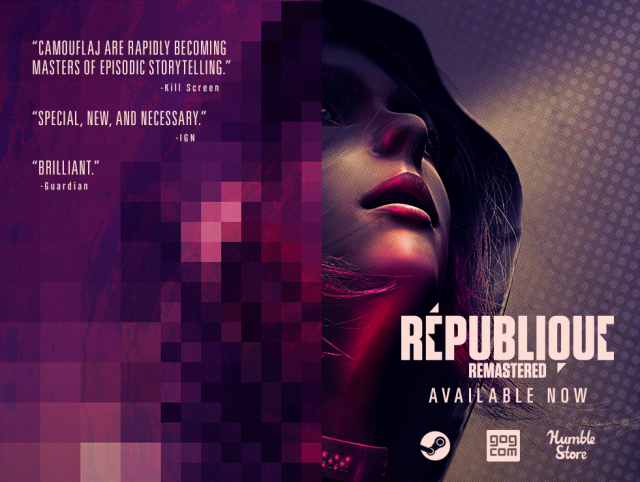 Republique (formerly Republique Remastered on the PC) is not only an episodic stealth game exploring government surveillance and personal freedom, but one in a new wave of titles that show “Mature” can be more than an age rating.

Republique tells a compelling story about the reach of government surveillance by using security cameras as tools to snoop into the most common elements of our digital lives–from emails, to voice recordings. The project raised over $500k in its initial Kickstarter pitch, attracting talents including voice actress Jennifer Hale (of Mass Effect) and game producer Ryan Payton (of Metal Gear Solid 4).

Clearly, Republique is a title that has captured the attention of many for a number of reasons. However, I couldn’t figure out until now what made the game special to me.

What impresses me about Republique isn’t merely its accessible stealth gameplay, lavish visuals, or unique approach to in-world storytelling. It’s what the developers left out in the process of creating this world that stuns. Republique provides an unflinching, often unsettling look into a twisted dystopia–all without depicting explicit content.

The developer, Camouflaj, didn’t resort to a flashed boob, hail of profanity, or seedy nightclub sequence to show you Republique is set in a dangerous and morally ambiguous universe. They didn’t need to.

Given free reign to explore Metamorphosis, The Overseer’s twisted vision of utopia, you’re simply left to find your own conclusions without fear of death or significant loss of progress. 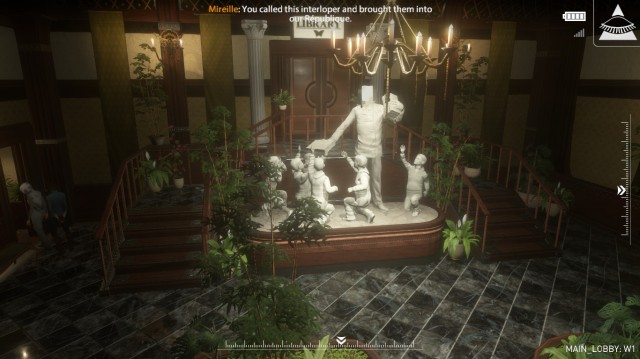 Mirelle berates Hope (the heroine of the game) for bringing you into their Republique.
A statue of The Overseer dominates your view.

The Overseer, Treglazov, is a rigid fundamentalist who changes everything within his sphere of influence to fit his personal philosophy. This results in the removal of nudity, innuendo, and profanity from the public eye (which explains why you as a player don’t see them). He bans and burns books, makes speeches showcasing a Messiah Complex, and has a glaring lack of self-awareness regarding the hypocrisy evident in his life and those of his followers.

His character’s effect upon Metamorphosis may be a critique of fundamentalist thought, with a focus on the censorship that can result when that viewpoint becomes law. It could be a device used to allow people of all ages to purchase and play Republique, despite the heavy subject matter. I don’t know. All I can tell for sure is that in my roughly 10 hours of play, I was more disturbed by suggestions of the dark goings on in the game’s world than by any of Andrew Ryan’s tirades.

“The Overseer seeks to eradicate nudity from art. Even as his body scanners create these vulgar portraits.“

Continuing a comparison of Andrew Ryan’s Rapture (of BioShock) and The Overseer’s Republique, Andrew Ryan’s hedonistic utopia tears itself apart due to a mix of every-man-for-himself ethics, widespread, addictive genetic manipulation, and hubris. It’s an interesting story that follows a logical conclusion–as long as your logic includes mutated men-become-monsters who shoot fire from their hands.

However, a culture that twists its people, corrupting their ideals to somehow grasp a version of perfection? An environment that cuts off all access to dissenting material to reinforce a chosen perspective? That isn’t just imaginable. It’s reality. It’s happened before, it’s still happening in places around the world today, and no matter how often it happens it’s terrifying.

I see it in churches.
A quest to please God ending in a desperate attempt to avoid being outcast by your fellow man.

I see it in the video game industry.
The same social systems used to protect those who had been rejected then being used to reject others who may not fit a given standard.

This is all conveyed in a title largely free of explicit content–and the more I looked, the more I realized Republique isn’t alone.

Ninja Pizza Girl (a game I helped work on) wraps a tale about emotional honesty and the importance of family around leaping teenagers delivering pizza. NEON STRUCT by Christian developer David Pittman (a friend I may work with on future projects) tackles personal compromise in a gritty dystopia without using player-initiated violence or curse words. Early Access survival game The Flame in the Flood captures the magical in the mundane, forgoing supernatural horror and gore (at least at this point in development) in favor of a lonely journey through a “post-societal America.”

Video games rated “M for Mature” by the ESRB are often held up as the foremost examples of what our industry can achieve. Meanwhile, the number of incredible, thought-provoking titles outside of that category grows by the day. It’s an awesome trend–one that opens the door into this activity for new players, broadens our understanding of what a gaming experience can be, and begins to call into question how we define “Mature” in this field.

[After the publication of this article, I started a new video series highlighting a few of these games, also titled “Beyond Rated-M”]

The Flame in the Flood

We’ve reached a point where technology allows us to depict or capture almost anything. The challenge you face as a developer is no longer can you make something, but should you, and with what level of detail? While this is an unprecedented question with individual answers and implications for each project, from the end results we’re seeing, I feel like it’s not even being raised.

The point is not that a flashed boob (while perhaps making you or me uncomfortable) is wrong, but the reason for it–the why–is usually tenuous at best. While creators should (and do) have the right to include what they wish in their work, the sad fact is that elements of this nature unnecessarily alienate players–particularly when they are not backed with options such as a gore, profanity, or nudity filter.

Using this content without a specific purpose or thought beyond “BEWWWWBS” or introducing some vague quality of ‘grit’ not only limits your audience, but comes across as uncaring. Within the game industry you have the limitless creative energies of people from almost every background imaginable. Not using this shared experience and humanity to explore alternative methods of conveying your message in a potentially stronger form, without resorting to content of an explicit nature, is more than disappointing. It discourages those who wish to see games evolve as an art form. It raises a possibly overwhelming obstacle for those who wish to enjoy your hard work, but struggle with issues such as porn addiction.

You could argue that without such material, games like Saints Row IV or South Park: The Stick of Truth would not be the same. I would agree, as the use of explicit content in these cases carries the weight of intentionality. In Saints Row 2-IV, explicit content is used to poke fun at the psychopathic, criminal mindset several popular sandbox franchises encourage. In South Park, the explicit is used as a tool of expression. In both examples, specific thought is placed into how something is used and why. As a result, even the careless strokes of what many would call tasteless humor shows a level of foresight. Additionally, the marketing and reputation of these series’ clearly let those coming in know what they’re getting into.

With that in mind, when your average AAA title attempts to use intense subject matter or explicit content to evoke a reaction and fails to do so (or does so poorly), it has no excuse. Independent games such as Dropsy by Christian developer Jay Tholen successfully deal with subjects such as grief, poverty, loss, love, and more with a fraction of the budget, manpower, and potential concerns. Meanwhile, larger projects that DO use explicit material with precise intent or invest in probing other areas emotionally and within gameplay, even when diving into crude territory, hold a tangible sense of thoughtfulness and restraint a title without it cannot achieve.

Ubisoft’s handling of human trafficking in WATCH_DOGS, while likely somewhat sincere, was cheapened by allowing players to ogle those being victimized and using the sequence to titillate.

Maybe this will only become clear when we as consumers and creators build and support those games that embody what we want to see more of instead of obsessing over the latest magnet of controversy, or following the poorly-laid yet well-received patterns of titles past.

Make a conscious decision to stop accepting the crap shoved in your face by an industry that ‘knows’ you’ll buy its latest product anyway. Speak with how you use your money, time, and attention. Realize that playing (or making) something doesn’t require laying aside your free thought, beliefs, and criticisms. Show that, even if you enjoy a title, you also retain your right to speak against its negative aspects from your unique perspective.

Be people who “knoweth to do good,” and do it.

*Some titles were received for review/coverage. See our statement of ethics here and game review criteria here.

*More from Video Games and the Bible.